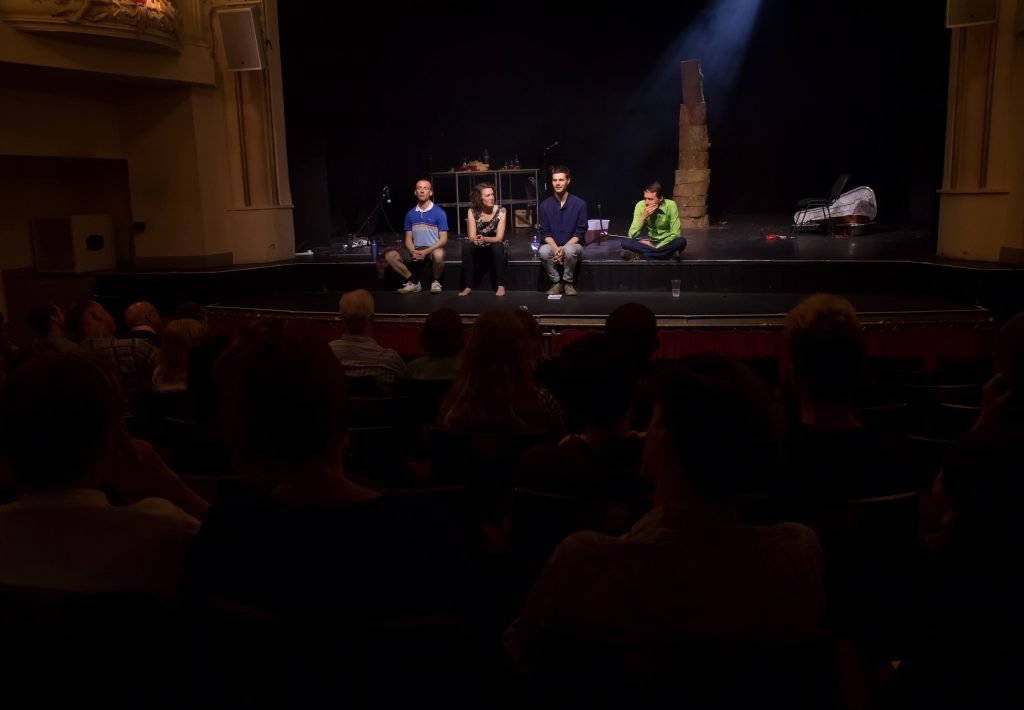 Last month, I was on a two week development residency with Claire Love Wilson, Rory Comerford and Alasdair Roberts at the University of West of Scotland culminating in a work-in-progress performance at the Gaiety Theatre in Ayr. We developed a staging for ‘Morag You’re A Long Time Deid’, a play written by Claire about the search for a common ancestor of three characters across three different generations of a Scottish/Canadian family who are connected by their Ballad singing tradition.

The project has been slowly cooking over the last four years when I first met Claire on a night out at the Art School in Glasgow. She literally fell into my arms on the dance floor. The evening before she went back to Canada, we spoke about loose ideas for a future collaboration over a pint and whisky at the Potstill pub in Glasgow. Little did we know that we would meet again at the same pub exactly four years later to discuss the script she had written. With the help of many dramaturgical sessions through Skype over the last year, we finalised the preparations for our first development period for the piece. We were eager to try out how we could carry the story dramaturgically through the music of traditional Scottish Ballads and loop-based live soundscaping. With acclaimed folk-musician Alasdair Roberts and our dear friend and experimental composer Rory Comerford, we had gathered an artistic dream team.

The process was not unlike many of our projects as a dispersed collective with The Doing Group. Many Skype meetings and discussions in online documents and shared folders leading to a short, very intense rehearsal period where all the prepared parts are tested out together. So was our shared interest in dramaturgy and the search for new theatrical forms that would be carried by the sonic worlds created. A central aspect of the work between actors/performers, musicians and myself as a director was to find a common language, to explain staging visions and nuances in acting to the performers who are primarily accomplished musicians using musical vocabulary (a practice I got used to in my work in opera).

I found it compelling to facilitate a meeting between music and theatre – two time-based art forms that combined to disturb linear temporality. The music and soundscapes were key in creating a felt ‘space of timelessness’ as it has been described by audience feedback at the work-in-progress sharing. The performance used the Ballads as gateways to transition smoothly between the three different time levels of the three generations and the soundscapes helped to place the scenes, even when it progressed into a mythical place of the valley of Elfland from one of the Ballads in which temporality was suspended enabling the three characters to encounter each other. The residency itself became like a time-warping portal in which we went out of time through dark Ballads and traversed colonial history, forest explorations and wood pigeon impersonations.

Besides a promising start of a new project with clear ambitions of where it wants to move after the work-in-progress sharing and new artistic friendships, I left the residency with a clarity about my interest in temporality in my own performance work. The interest in time runs like a red thread through my work from my first staging of a multilingual version of Samuel Beckett’s ‘Waiting for Godot’ seven years ago, to an original performance ‘Flow: a dramatic haiku’ in which I tried to find a dramatic form inspired by Japanese haiku poetry to explore the last words of my grandmother: ‘Maybe time is really the most precious thing we get from life and to treat it preciously will always remain a life wisdom.’, as well as my choreographic and site-specific exploration of ruin(ed) temporality in TIME DUST which I hope to redevelop in the coming season on the suggestion of The Doing Group’s Irina – of course with her as dramaturge.

In ‘Morag, You’re A Long Time Deid’, it was Claire’s grandmother who inspired the piece and to start thinking about time through music. The residency was definitely a precious use of our time and resources, and its questions continue to resonate deeply as I constantly hear wood-pigeons and continue to dream of how it can be developed further in the future. Time will tell.